In December a deep freeze engulfed Finland. As it had been quite a warm winter till then, the sea started freezing up very rapidly. Now in January, the ice was thick enough to dare to walk on it.

Just before going on our little adventure we saw a lady taking a dip in the ice-cold sea. I  have never tried winter swimming but apparently you feel refreshed and wonderful afterwards. 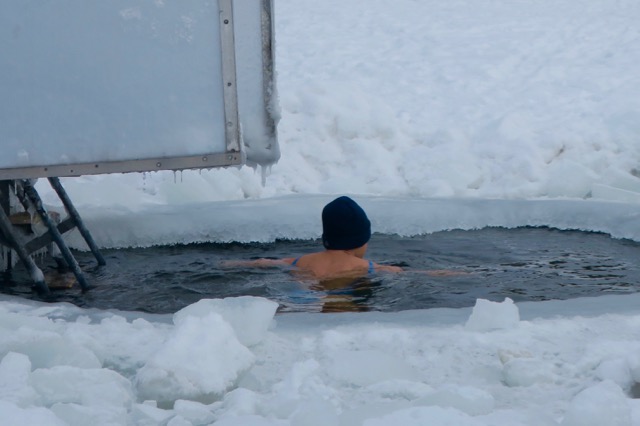 Even though it was not a sunny day, people were out and about enjoying walking and skiing on the sea and even making trips all the way to nearby islands. 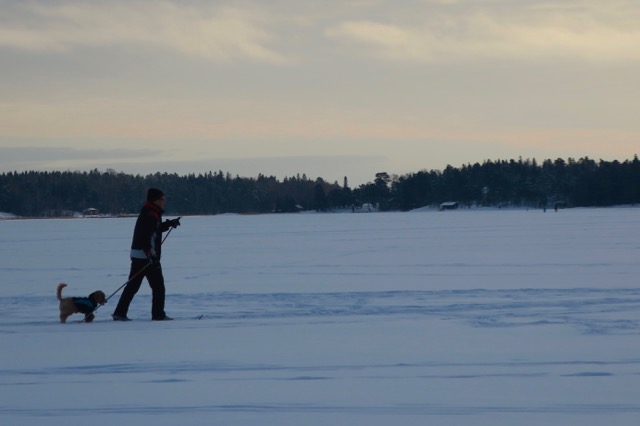 See that red thing dangling from my neck? That is an ice pick. It’s just precaution in case I fall in. I didn’t see anyone else wearing one. I am not exactly sure if I’d manage to use it if the unthinkable happened.. but better safe than sorry. 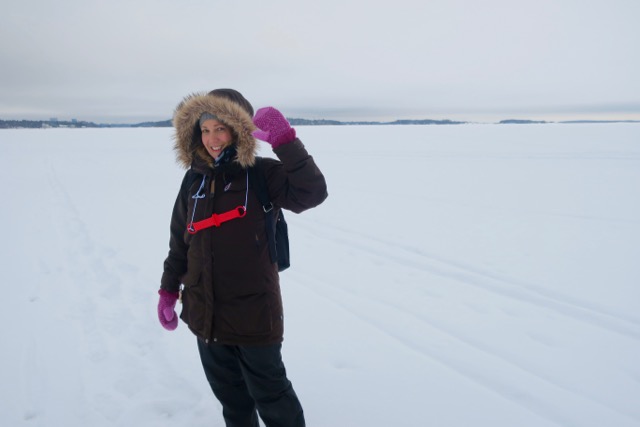 Can you see those red and green markers below? Those are lateral signs to show boats which way to go in order to avoid the rocks in front of this island. We often pass between those markers with our boat. 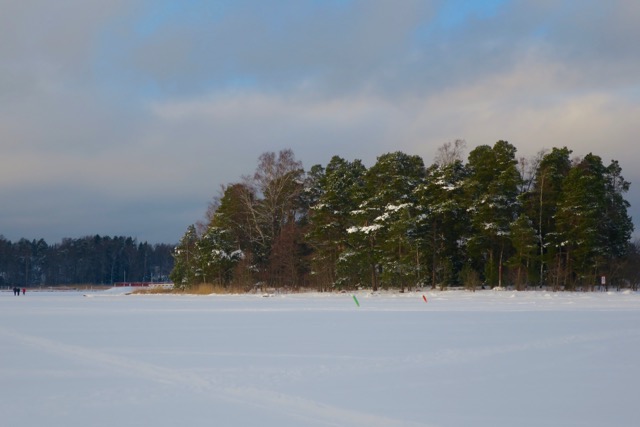 This guy had come to ice fish, a very popular sport in Finland. 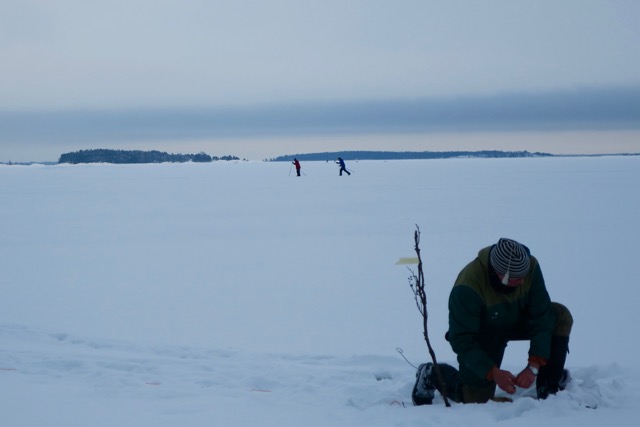 From this ice fishing hole you can maybe get an idea of how thick the ice was on the day we ventured out. 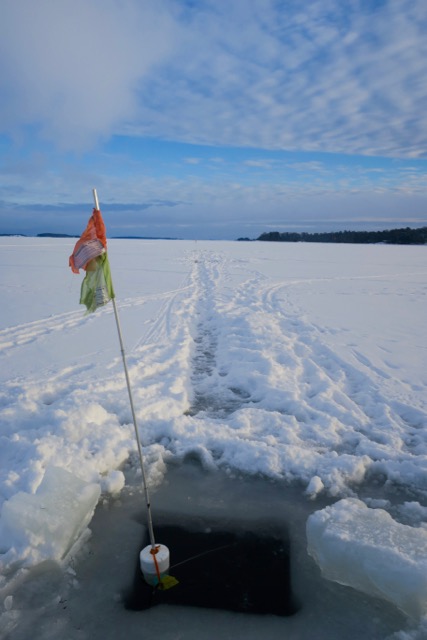 Cracks in the ice – yikes! 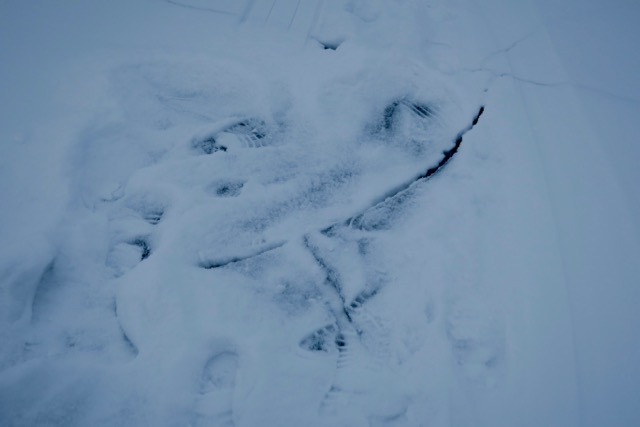 We walked from Mellsten beach to an island called Iso Vasikkasaari. It is one of my favourite islands to visit in the summer because of the very good restaurant there called Gula Villan. Gula means yellow in Swedish and as you can see, that’s the color of the pretty villa. A funny fact – gula means sugar in Malay.

The restaurant is open only in the summer months. 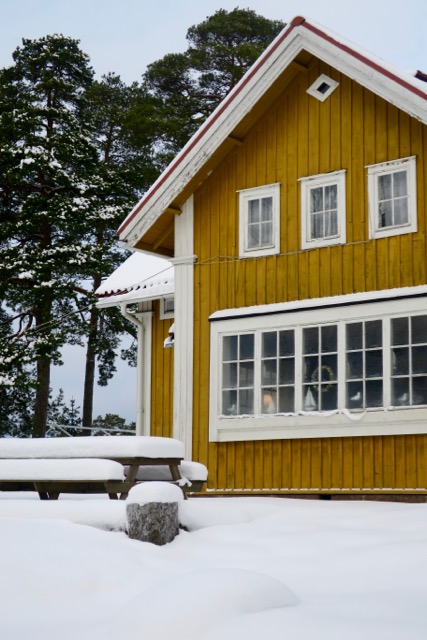 The island is only accessible by boat, so you can imagine how special it was to go there in winter when it’s practically impossible to get there. There was firewood available if you wanted to make a fire in the grill. 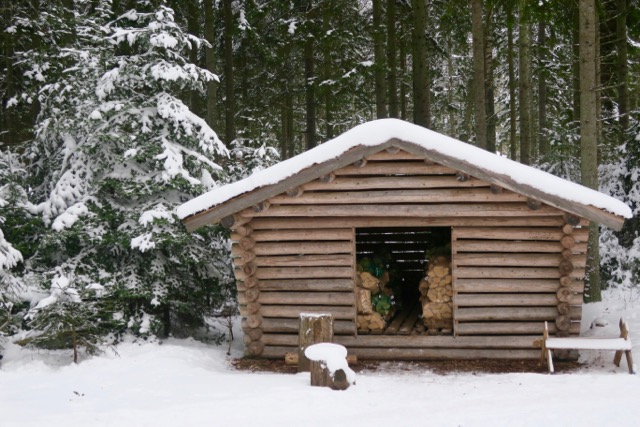 We had packed some coffee in a thermos and Karelian pies (karjalanpiirakka). These are traditional Finnish salty pastries which you eat in a similar fashion as bread. 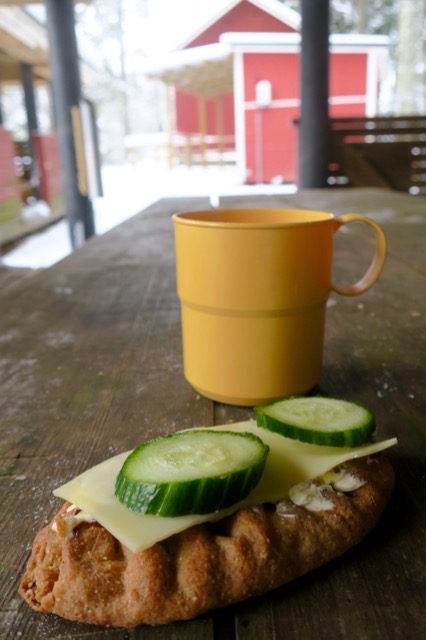 There are many islands in the Espoo archipelago. Without the leaves on the trees the houses were more unprotected than in summer and thus easier to see. 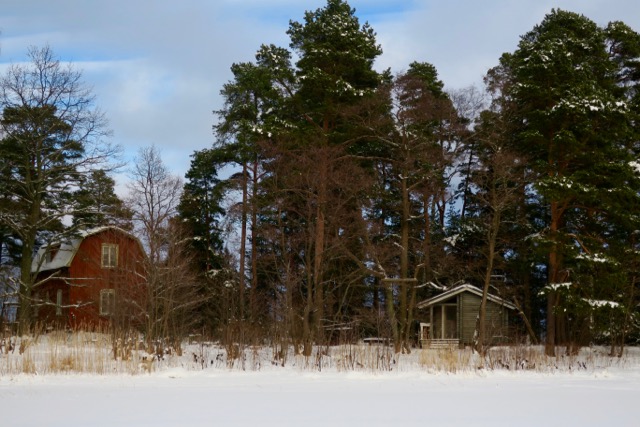 These red cottages look so cozy but no-one was home. 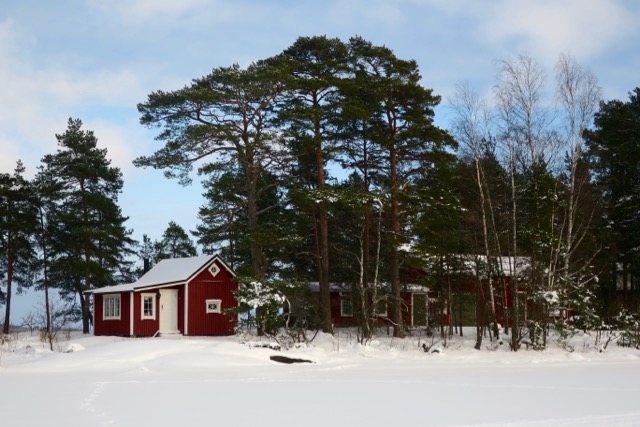 This boat is snugly fit in it’s own shed. 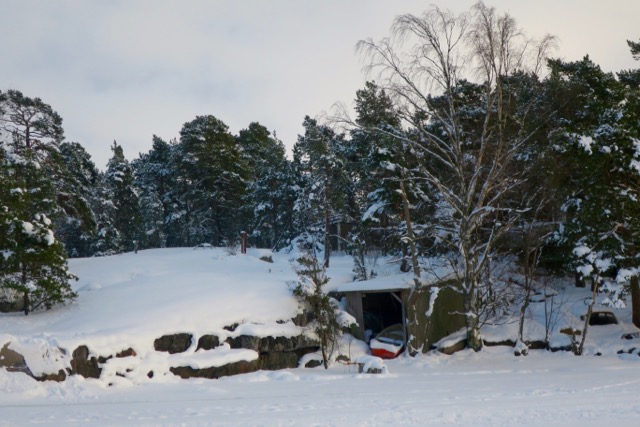 No swimming allowed. Hmm.. it would not have crossed my mind. 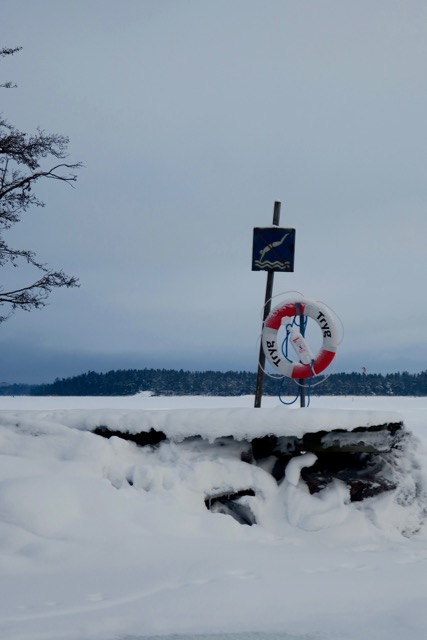 Look at this small dock all covered in snow and ice – looks so idyllic. 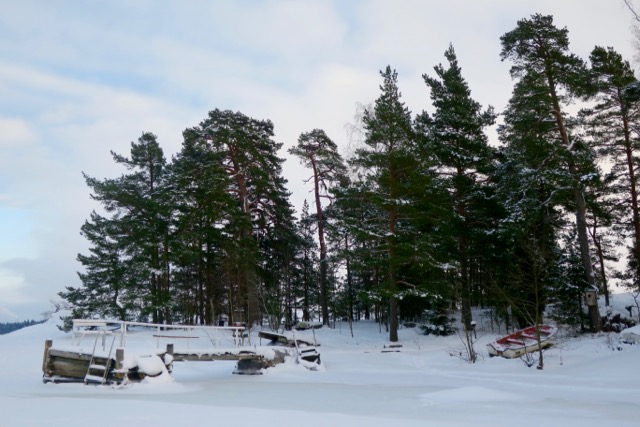 Which meant that it was time to go home. 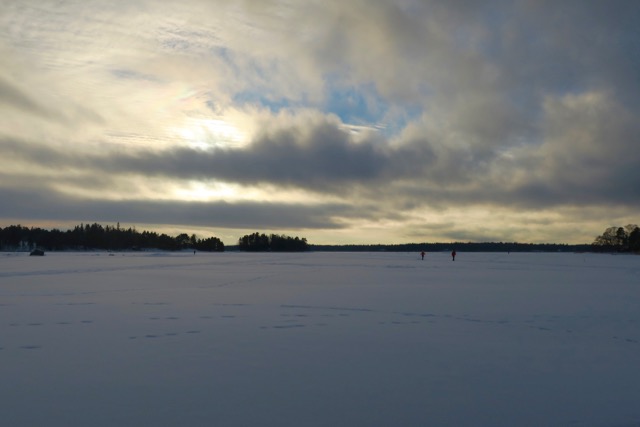 Right now the weather has turned again and the snow is melting. I would not personally go on the ice anymore, as I do not want to take any risks of the ice breaking and falling in.

Have you ever had a chance to walk on ice? Was it a lake or the sea?

13 thoughts on “Walking on ice in Finland”

Congratulations to all graduates this year especially our son Aaro who graduated from the 9th grade! 💕💕💕
Check out ➡️ mrssuvi.com and my isolation cravings 👀 #friendlyfriday
Summer is on its way 😎☀️
Hauskaa vappua! 🥳🎉
Signs of Spring 🌱
Espoo ❤️