It’s a good idea to look for a traditional bierhaus when visiting Germany. While staying in Ratingen – for the boat show boot Dusseldorf – my husband and I found a homey German brewery/restaurant very close by our hotel.

Ratinger Brauhaus is not a touristy spot. The patrons seemed to be mostly locals or at least German. Clearly many were regulars too. It’s a very lively and busy restaurant, but even then, the service was very attentive and quick.

The restaurant did not consistently look the same. In the middle was a pub with the kind of traditional decor you would assume you’d find in a bierhaus.

On the side you could find a more modern look, as seen below. And at the back, it looked quite plain, like something for functions where many chairs and tables are needed. If possible, I would opt to sit in the more traditional section.

The local beer in the Dusseldorf region is called Altbier. This restaurant brews their own Ratinger Alt. I am more of a cocktail person but of course I had to have a taste. Alt is quite fruity and has a copper colour. The number of beers you drink will be marked on your drink coaster, so don’t lose it. 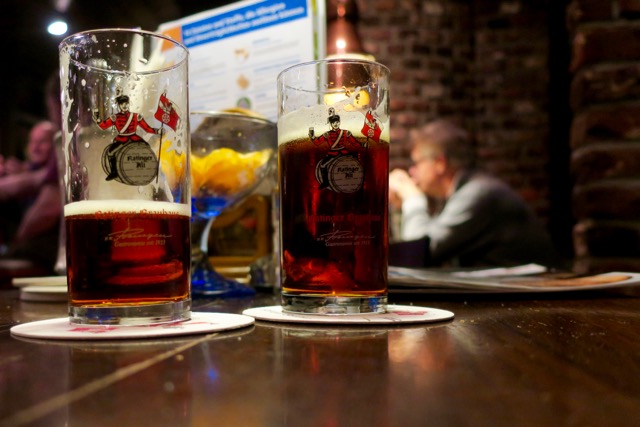 What you should keep in mind is that each time you finish your beer, you will be brought a new one almost immediately. Without asking. At the end of the evening, to show that we were finished, my husband took his wallet out and put it on the table. I’m not sure what the correct way to signal “no more!” would’ve been, but this is how I observed the other patrons did too.

We were very hungry on our first evening and were lucky to find this place as the portions are huge! I had the schnitzel. Oh my. There were two schnitzels, some fries and a lovely salad.

My hubby loved the schnitzels so much that he had the same thing the next night. I decided to be a bit more adventurous and had the sauerbraten –  a kind of pot roast – with red cabbage and potato dumplings. It was an interesting meal but the sour taste of the pot roast was a bit too adventurous for me. I also tried a Weissbier but must say I prefer the Alt. 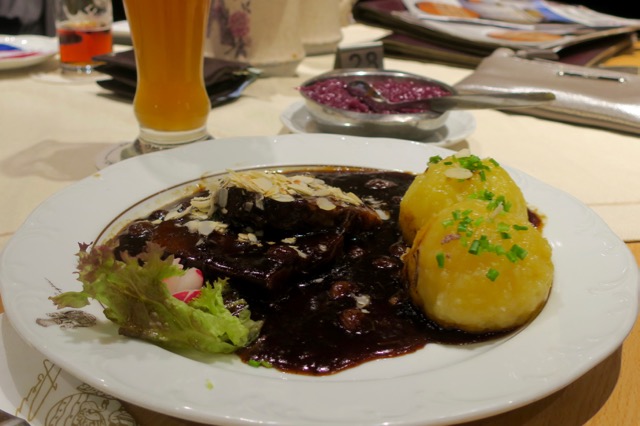 The prices at Rantinger Brauhaus are excellent for the size, freshness and quality. All in all, we visited three times – twice for dinner and once for a nightcap. On our two last evenings we were greeted as regulars. Kudos to the staff for the friendly atmosphere and making us feel at home.

Have you ever visited a traditional German bierhaus?

15 thoughts on “A traditional German bierhaus”