I woke early on a Saturday morning in London and was out and about before nine. Fellow blogger Marion mentioned visiting St Katharine’s Docks in one of her blog posts and I knew I had to go and have a stroll around the area.

I exited the tube at Tower Hill and took a moment to walk around the Trinity Square Gardens. For a city, London has so many beautiful green spaces.

I walked past the Tower of London but did not stop for a visit as I have been there as a child and hope in turn to take our son there one day. Many people were already queueing for tickets, so if you plan to catch a glimpse of the Crown Jewels, then it could be a good idea to make your way there early in the morning. 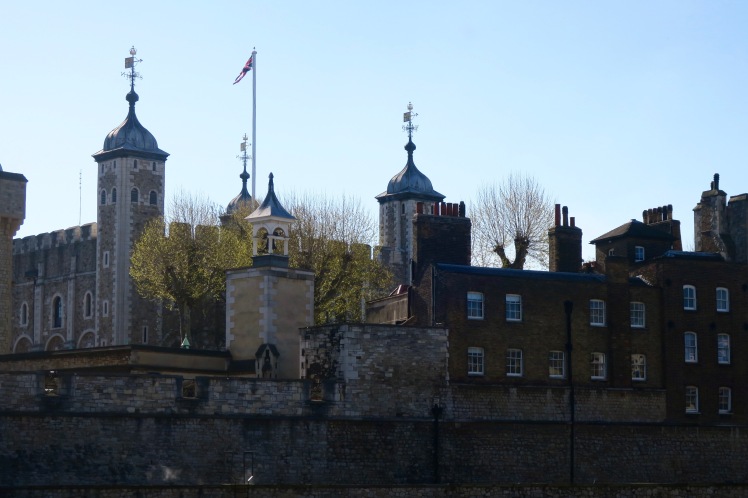 Notice the lion statues below? There are different animal statues dotted around the area as a tribute to the animals that were kept at the Tower back in the day. Medieval kings liked to gift each other with exotic animals apparently. Besides lions, tales tell that there was an elephant, monkeys, a polar bear and even an ostrich among others.

I continued on the North bank of the Thames towards the Tower Bridge – a quintessential symbol of London. 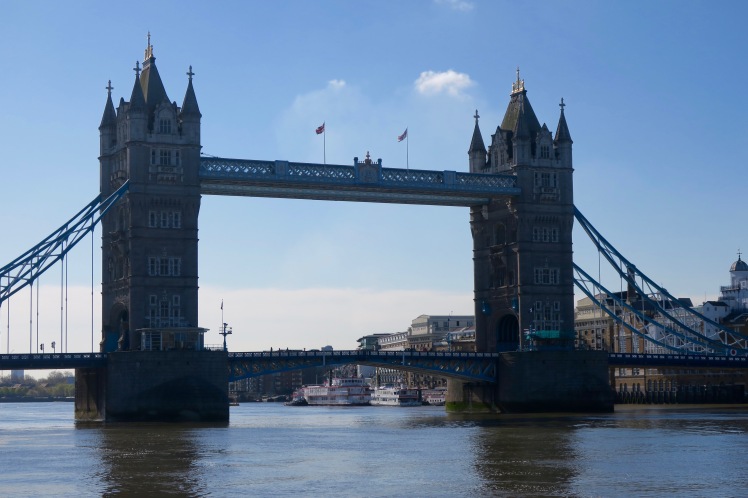 Onwards, I found one of my favourite statues – Girl with Dolphin. There’s also one called Boy with Dolphin but I only read about it after my trip and sadly did not see it. 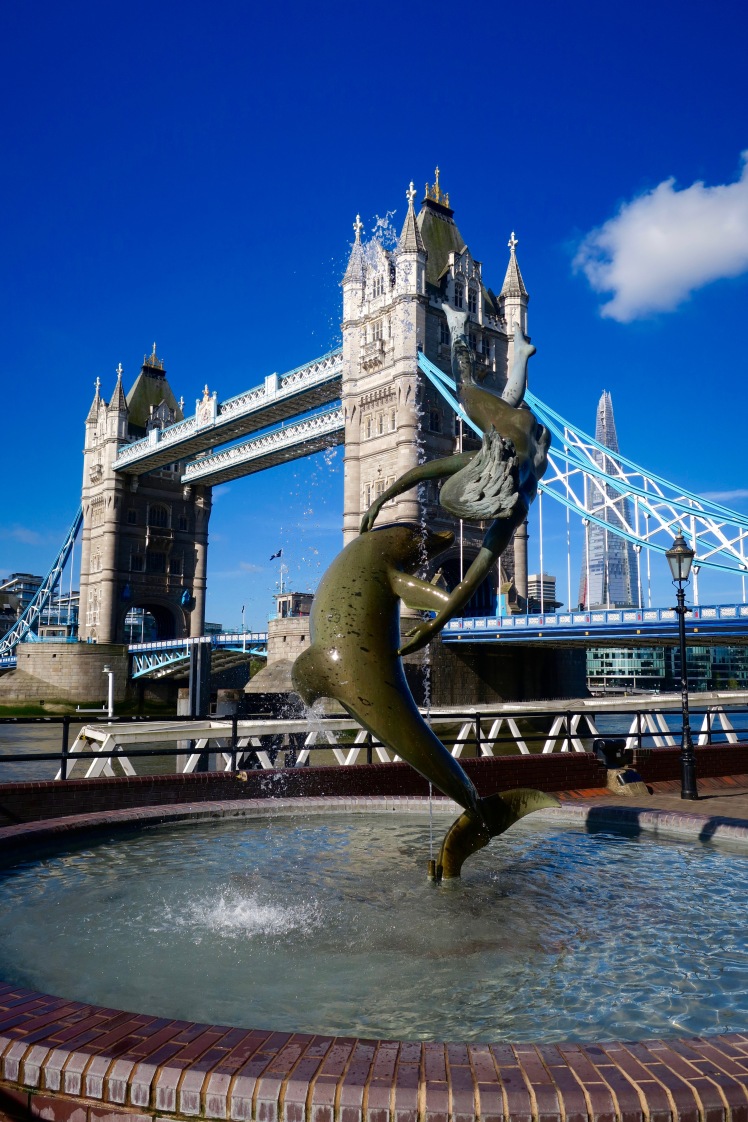 Still waking up, St Katharine’s Docks was peaceful and there was no sign that a boat show would start there in a week. 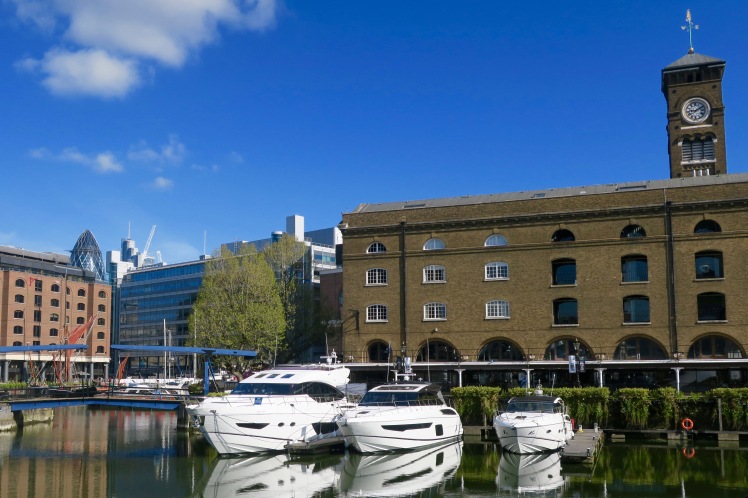 I never tire of looking at boats. Like Little Venice, boats entering the docks must pass a lock. For someone from Finland, where tides are hardly noticeable, it’s surprising to hear that Thame’s high and low tides can vary 9-10 meters!

It was lovely walking around, especially since it seemed that I was almost the only one there.

On my way back to the Tower Bridge, I noticed the Dead Man’s Hole. Bodies that floated along the river were fished out and stored in the open air mortuary below the steps. There the bodies awaited identification till buried. Spooky!

As I crossed the bridge, I admired the view. Right in front you can see the 9-deck WWII warship which has been turned into a museum.

That pointy building is The Shard. It has 87 floors, houses a hotel and offices. I have heard that there’s a cool restaurant with a view too.

Can you spot the bullet-like glass building right behind one of the towers? That’s the Gherkin. 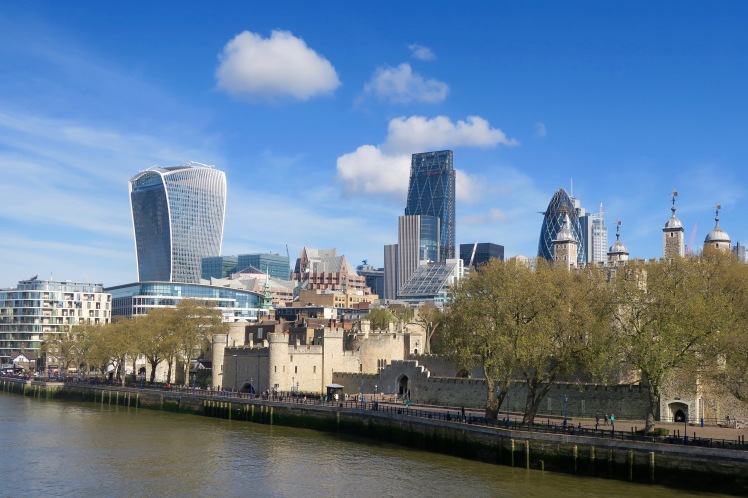 The South side of the bank was quite modern. People were out and about on morning runs.

These guys seemed to be having a photo shoot of some sort.

The London Bridge all children sing is falling is quite inconspicuous actually. It seems to be very robust indeed, so no need to worry.

On the way I noticed a great looking café underneath a bridge. Even the bleakest of places can look pretty when adorned with cute pillows. 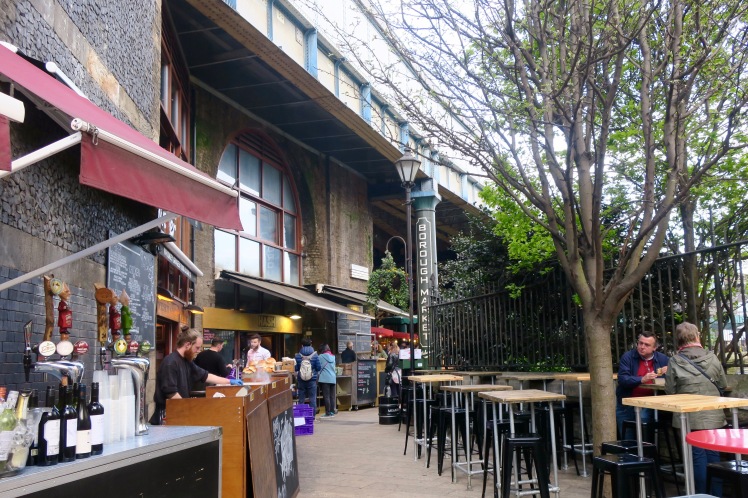 Oh yes, this market is a must for all foodies. 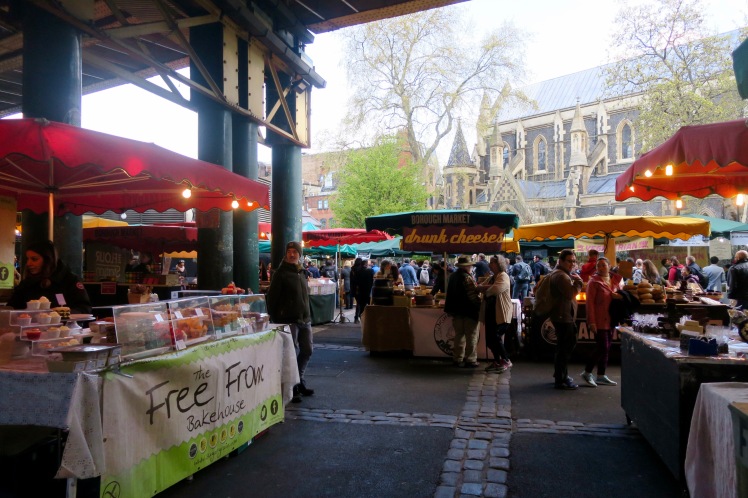 Those scones on the right were calling my name but I had to ignore them as I’d just had breakfast.

Coffee for a good cause. 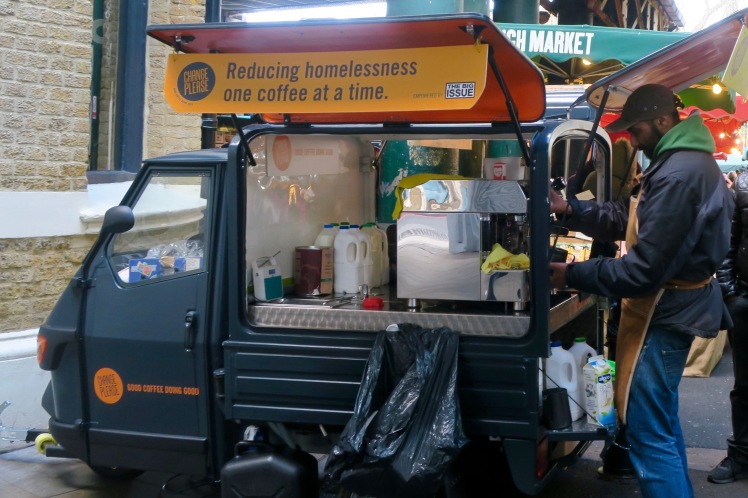 Even though it wasn’t even midday, the market was bustling.

My goal on this trip was to try Pimm’s but it was a bit too early for that. Or is it always Pimm’s o’clock?

Like Market Hall’s in Helsinki, Londoners can pick up their veggies at this market.

And the fruit and berry cups even better!

There was lots of interesting and inexpensive food all around the market, so next time I will definitely visit when I am hungry. Nevertheless, it’s a cool place to check out for the atmosphere alone. Naturally my day did not end here but but more about that in a separate post later on!

Have you been to St Katherine’s Docks? How about Borough Market?

17 thoughts on “St Katharine’s Docks and Around”