If we were having coffee, I would ask you to meet me at a café as our apartment is such a mess after what I call pre-move cleaning. There’s all kinds of unwanted stuff in our living room which someone (me?) should take out to charity, etc. – you don’t want to see it, believe me!

If we were having coffee, I’d probably first vent about the problems I’ve been having with WordPress! I try to schedule posts but instead they publish immediately. This of course means that notifications are sent to those who follow my blog via email. My sincere apologies to all of you for spamming your inbox, I am really trying my best to get this fixed.

What have you been up to this week? I’ve had a busy week as always. On Friday I went shopping with my mom to check out the newest wing at the Iso Omena mall in Espoo. It will soon be the second largest mall in Finland but first we will have to wait for the second phase to open. I’m already pleased for what it offers now. For example, there are some interesting new interior design stores there.

On Saturday I spent some time with my daughter. She’s been so busy lately that I hardly see her. I guess it’s part of growing up but it does take some getting used to! We went to the International Food Market in Helsinki for some Malaysian fare. The Market had many different vendors from all over the world but it was actually organized by the Finland-Malaysia Association. Naturally for us, the Malaysian tent was the one that enticed us the most.

It was pouring with rain! And of course it turned out that the two umbrellas I carried all the way there for us were both broken. 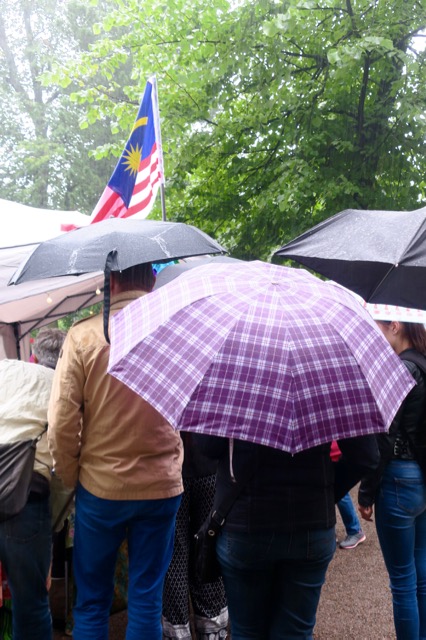 I was crushed that the curry puffs were sold out. I was really looking forward to getting loads. The Malaysian tent was so lively – it’s always great to talk to Malaysians – so friendly and fun! 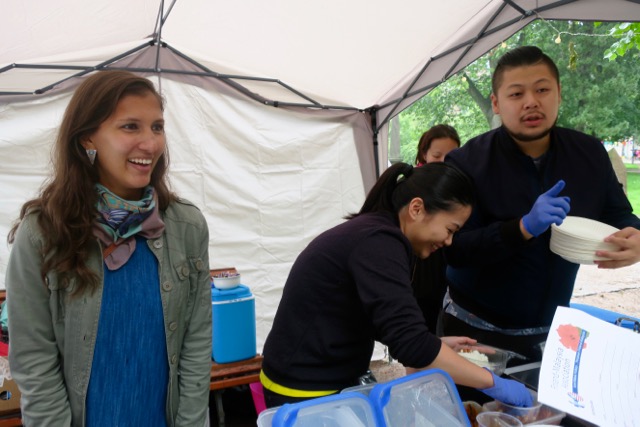 We got all our food take away as that way we could have more, LOL! Besides, it was raining so heavily that eating outside would have been an ordeal. We got two different types of nasi lemak (should’ve only gone for the original), chicken rendang (so good) and some Vietnamese summer rolls from another tent.

Despite the rain, we decided to have some bubble tea before going back home to taste our goodies.

On Sunday after the morning rains were over, hubby and I went sailing. We went all the way to Helsinki which took ages. I’m used to going there in 30 minutes by motorboat so this too takes some getting used to. 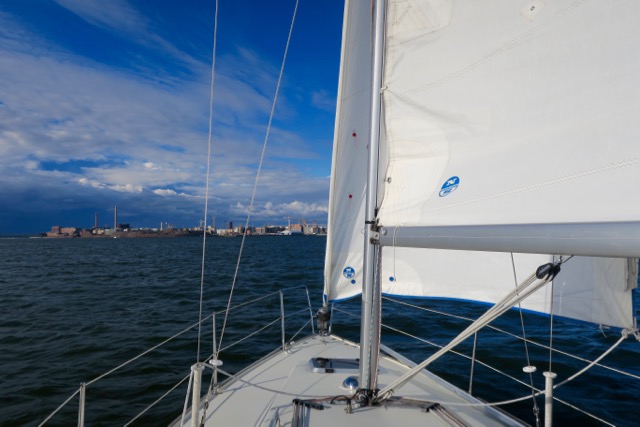 On the way back, we did catch a gorgeous sunset once again. 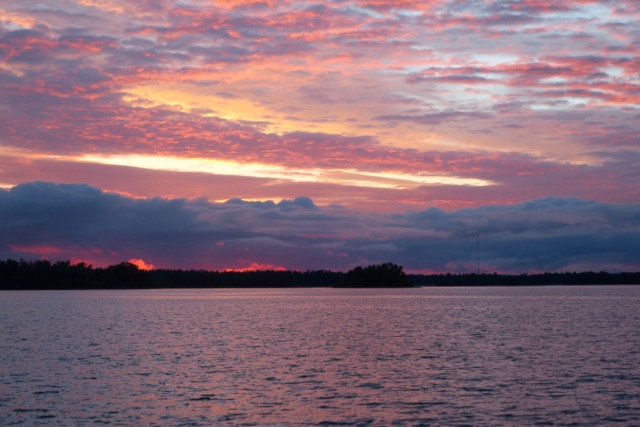 I had earlier decided to take Monday off work and what a great idea that was! It was also our son’s last day of summer holidays so we spent some time together, going on a walk and out for lunch. We had some pasta at Makaronitehdas in Iso Omena. The restaurant originates from the seaside town Hanko, the same way as as Hanko Sushi. The carbonara was great but the portion was so huge that we had to get the rest to go.

Hopefully Monday wasn’t the last warm day we’re going to have this August. I was overjoyed to wear shorts and hope there will still be warm days to do that.

On Tuesday I met Stephanie from Malaysian in Europe and her friend Rob to check out the Koff pub tram. It’s called Spårakoff and in case you are wondering they serve all kinds of drinks there, not just beer.

I was pleasantly surprised. For some reason I thought that it would be awful and full of drunk people. The reality is that the tour takes around one hour, so it’s not even possible to drink loads in that time! It was great meeting up with Stephanie as she’s moving back to Germany this weekend. How sad, we only just met. Rob was great fun too! He’s just been on an amazing trip to Peru but doesn’t blog unfortunately. I think he’d have a lot of fun stories to tell – he’s from the UK but lives in Finland and Finns love to read about what foreigners think of our country. LOL! How about it Rob – Englishman in Helsinki? 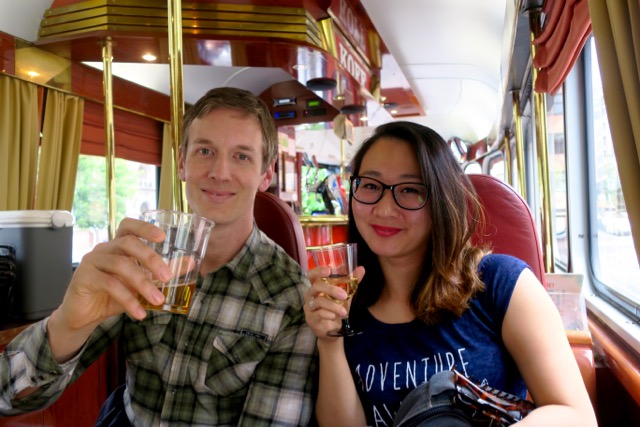 The tram tour costs 10 euros, which meant that most of the people on the tram were tourists. This tram has been operating for 21 years, so it was high time I tried it. I recommend it to other Finns who haven’t been. You can even rent it for a private event if you like. We took the five o’clock tram and it was full. It’s a good idea to arrive around 15 minutes before departure so that you get a seat.

After our tour we went to Momo Toko which again was a pleasant surprise, I loved my teryaki chicken and will definitely be returning. They have great looking ramen dishes too. 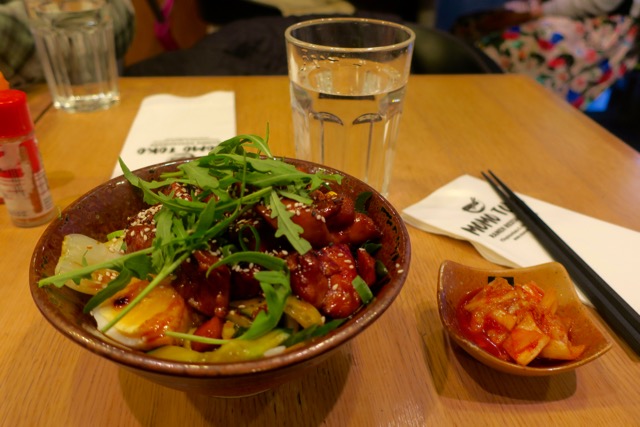 Rob had to go back to work after dinner, so Stephanie joined me for some umbrella shopping and we went for a peek at the Torni Ateljee Bar which boasts great views. As it was quite rainy only one balcony was open but we managed some photos and a visit to the ladies’ toilet. You might think it strange that I would mention a visit to the restroom but Torni’s one is very unique as it has a view! Go and see for yourself.

After some mango-ginger frapinos at Espresso House it was time to call it a night.

On Thursday hubby and I went to a concert at Hernesaaren Ranta. All Finns know the band but if you’re not a Finn it’s not really going to ring any bells – Eppu Normaali. They sing in Finnish. Unfortunately this private booth below wasn’t for us!

But guess what I finally got to taste?!

Hahah, you can see from my face that I was very pleased. Yes, Cone’s! I had a crepe called Fruit Cocktail. It had chocolate sauce, whipped cream, bananas, strawberries and kiwi inside. Do I need to tell you it was delicious?

The concert was fun but not as good as I expected. At the end it started raining, it was quite funny when everyone rushed to put their raincoats on and were dancing in the process. Thank goodness I was wearing my sailing jacket. I even had a wooly hat and gloves with me which came in very handy as it was freezing. What I liked about the concert was that it started at 8 pm so we were home before 11 pm. Yes, you appreciate things like this after you turn 40! 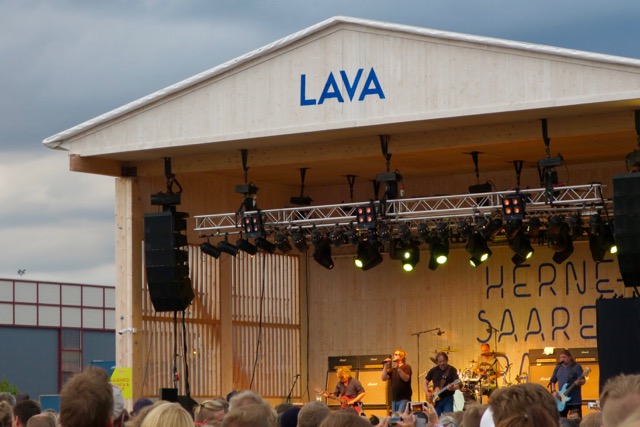 By the way, before it’s your turn to tell me your news, I must mention that I’ve been quite obsessed with oatmeal for a few weeks now. Yes, you heard right, oatmeal. A shop near my office, Anton & Anton, has take-away oatmeal with really great toppings. For example strawberry with rhubarb, blackcurrant compote or apple sauce. Or mascarpone with lingonberries. Mmmm.. it’s so good. If you ever go, my advice is to choose two different toppings. At least. 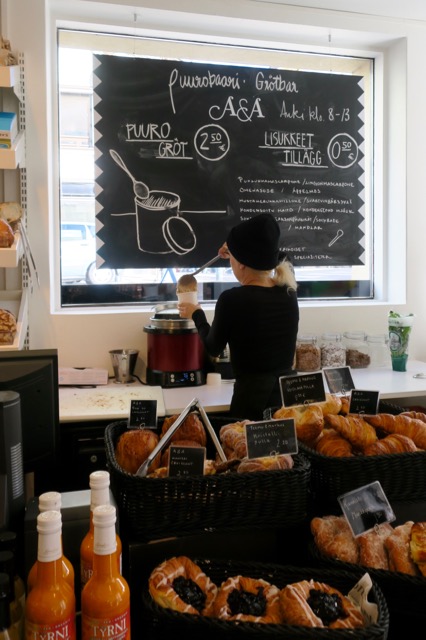 The shop is very cute all in all and you can usually get pulled oats (new trending veggie food) there too on Mondays. As it’s a gourmet shop, it’s quite expensive. You’ll be sure to find all kinds of specialities there though. 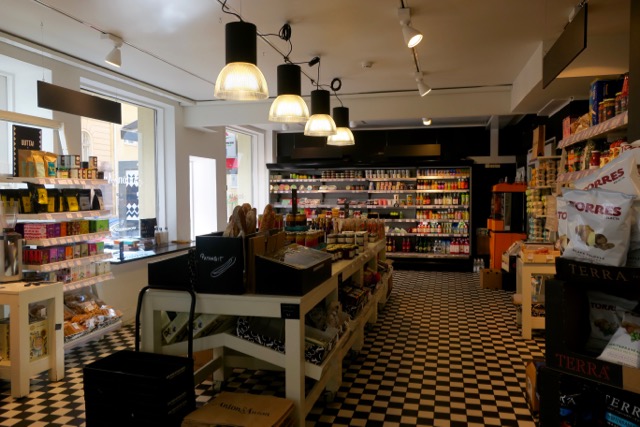 How are you? Join the weekend coffee share community at Diana’s blog with your own post or drop me a line in the comments below. If you like linkups and challenges, you’re welcome to check out my Saturday Statues challenge and join in.