Hello all! I have just returned from a memorable trip to Tanzania. The reason for my long radio silence is that the Internet connection in the country was next to none and when I did get a boost of WiFi, I used it mostly to send quick messages to family and friends in Finland.

The reason for travelling to Tanzania was a study trip with 18 other students from Finland. We spent almost two weeks there.

Travelling to Tanzania from Finland isn’t easy. Our first flight was Helsinki-Stockholm. Some of my fellow students had started travelling hours earlier, as they live further away from the Helsinki region and had to make their way to the Helsinki-Vantaa airport first.

After Stockholm, we had a layover in Addis Ababa where we had hours to kill. Then, it was time for our final flight to Dar es Salaam.

After arriving in Dar, getting our bags and through customs, our group started making our way to Iringa by bus.

As you can see below, the suitcases were stacked in a very interesting way inside the bus. Every time the bus went over a bump, the bags would slide forward. Thankfully none toppled over onto our heads and we survived the trip!

If you are going to get your visa in Tanzania, make sure you have some snacks and drinks with you, as it make take time. Luckily we had applied for student visas in advance, so customs went fairly smoothly. With so many layovers, it’s a good idea to have some extra clothes in your hand baggage, as often bags are left behind and may take days to be found and delivered to you. 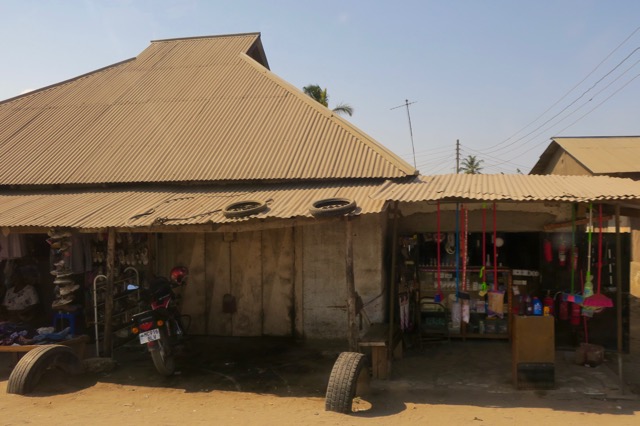 The bus trip both ways was quite exhausting as the trip was close to 500 km and you can imagine that the traffic wasn’t always very easy going. 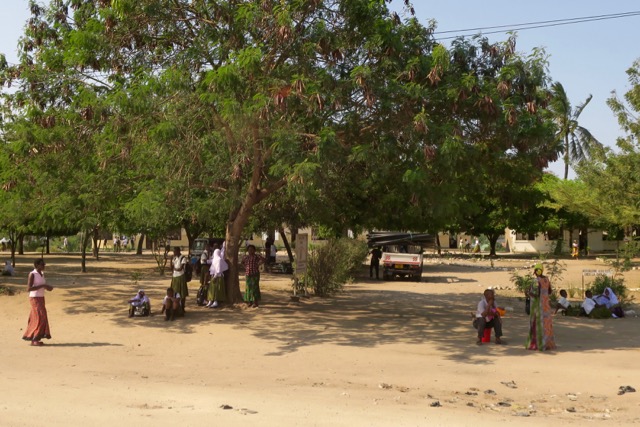 As everyone had already been travelling for almost a day, it had been decided that the first leg of the bus trip would have an overnight stop in Morogoro. We arrived there late and had our dinner, only to wake up again at 3 am to finish the journey to Iringa.

The minute I got in my room, the heavy drapes fell on my lap. I proceeded to put them back as there was no way I would sleep in a room without curtains. But being a short person it was quite a struggle and I ended up falling on the floor and bruised my legs!

Then, I noticed that there was no towel in my room. After almost two days of travel, I was very much in need of a shower. But alas! I was told that the lady who is in charge of towels was out of town!!! I kept going back to ask for the towel and in the end I did get one from a drawer at the reception. It was probably there all the time. Some people had problems with their showers and had to wash their hair under a tap but I guess you make do.

Travelling by bus in Tanzania may not be very comfortable (imagine blaring African music throughout the journey accompanied by colorful music videos) but there sure is a lot to see. On the morning we left Morogoro, it was interesting to realize that people were up and about the minute the sun was up. In Finland the streets are very empty at such hours. 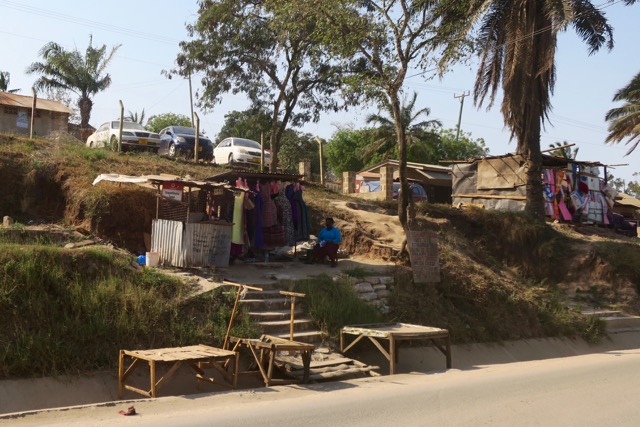 Then, in the evenings as darkness fell, people were back inside and there were no lights to be seen. In fact, I read that under 20% of Tanzanians have electricity.

There were many stops on the way, as the police had check-points now and then. As you can imagine, the police often found some “fault” in our bus and fines were issued. 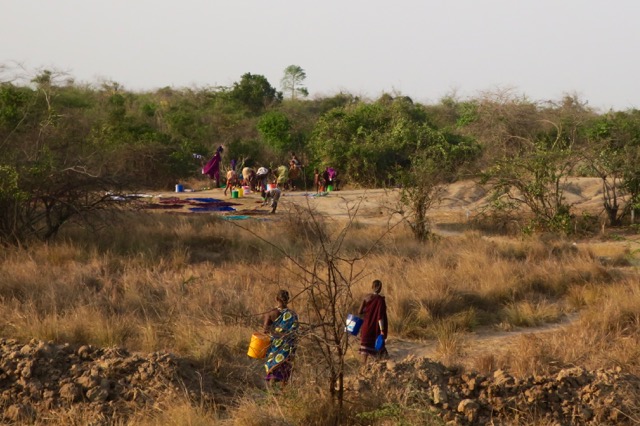 On both ways, we passed through the Udzungwa Mountains National Park.

Even though we did not get the whole National Park experience, we spotted antelopes, giraffes, zebras, monkeys and wild boar. Quite good for just a measly drive in the region but of course photos were difficult to get, as the bus did not stop for our sightings.

Do you know what the colorful cars below are called? You may know them as tuk-tuks but in Tanzania it’s called a bajaji.

People seemed to spend a lot of time outdoors rather than in.

Life in general seemed less hectic than it is for us in Nordics.

May I entice you with some onions perhaps? 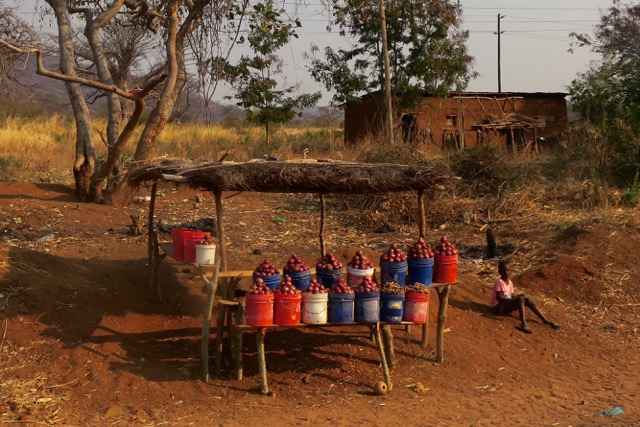 Or are you in need of a bed?

I love how the ladies tie their babies to their backs. 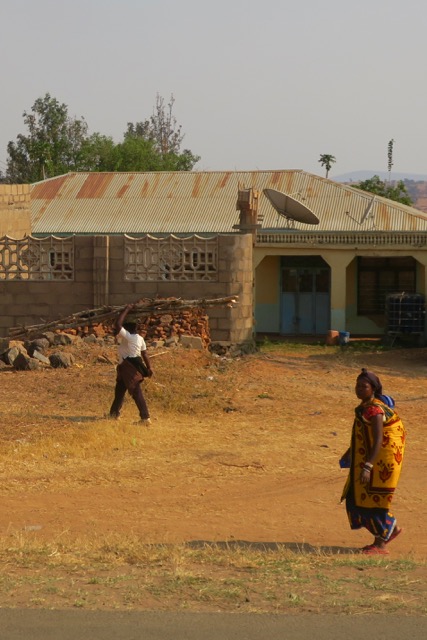 We saw a lot of cattle, and Masai herding it. 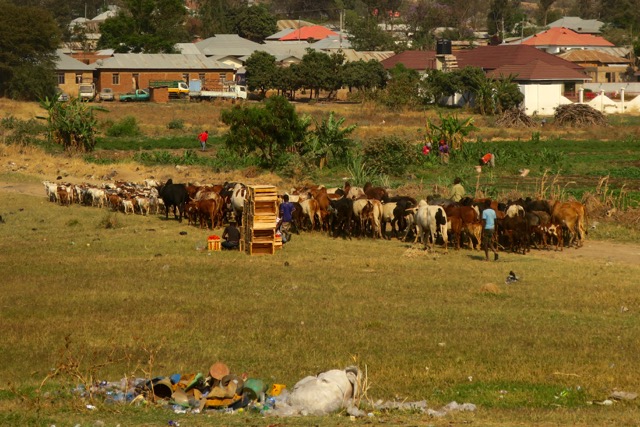 Pepsi has made it’s way everywhere.

When coming back, we had to take a detour as a bridge had collapsed after heavy rainfall. The detour was difficult too as the road was so muddy that a truck had got stuck and had fallen over on the road. Traffic was at a standstill for hours. I was afraid our bus would get stuck in the mud too, as our luggage was so heavy but the bus driver knew what he was doing. 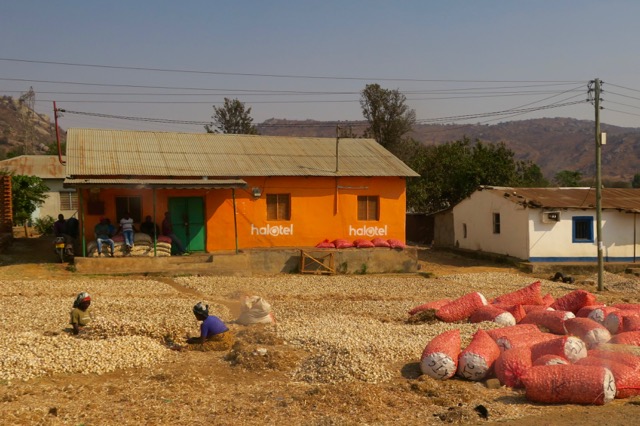 Asante sana (thank you in Swahili) for reading through this photobomb of a post! Have you been to Tanzania? Do share your experiences in the comments below, I’d love to hear them.