We woke to a sunny morning in London and started the day with a traditional English breakfast at the Travelodge. For the picky traveler, they did have yogurt and fruits in addition to beans, eggs and sausages.

We took a bus from the front of our hotel thinking that it would take us right to the Tower of London. However, I had not realized that transport going near the London Bridge would have alternative routes that day. The bridge was still closed due to the stabbings. Suddenly I heard the bus driver saying something about the stops and I had to rush up to him to ask where we should get off. He was kind to advise me on where we should get off and even showed us which way we should walk! With his expertise help, we found our way to the Tower in no time at all. 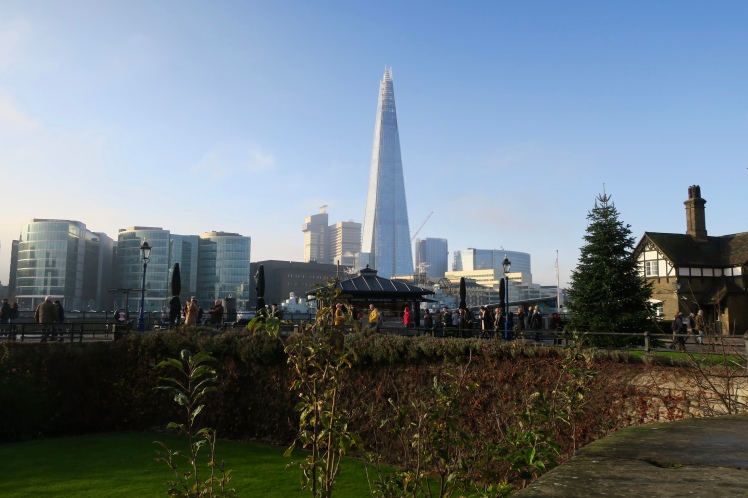 At the tower we were awarded with beautiful views of the Tower Bridge and the Thames. I had bought our tickets online in advance, so we were able to go straight through the gates. As we were out and about quite early, there weren’t even any queues and our progression through the buildings was easy. 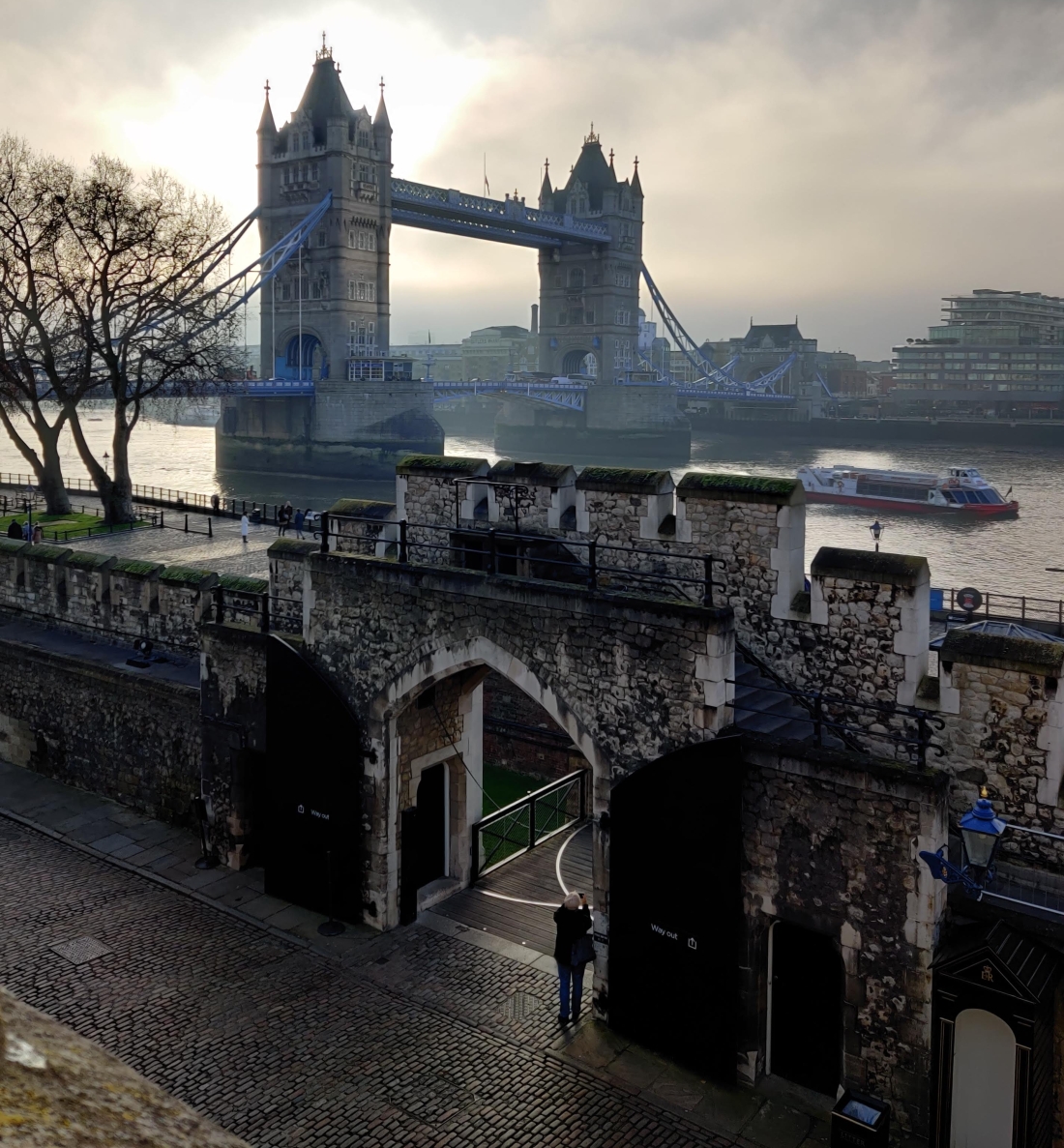 We roamed the grounds and the buildings for a few hours and ended our tour with the spectacular Crown Jewels. Imagine that the the Crown Jewels have been on show at the tower since 1661! Back in the day, visitors were allowed to touch them. The Crown Jewels are worth seeing for their staggering beauty and the famous Koh-i-Nûr (or ‘Mountain of Light’) diamond. You might recall the tale of the diamond, discovered in 15th-century India, it gained a reputation of bringing bad luck to the owner as it was passed on from man to man. On the Sovereign’s Sceptre with Cross you can see the world’s largest top quality cut white diamond – the Cullinan I diamond. Also the second largest diamond, the Cullinan II can be seen here. I never knew I was so interested in diamonds till I saw all these! 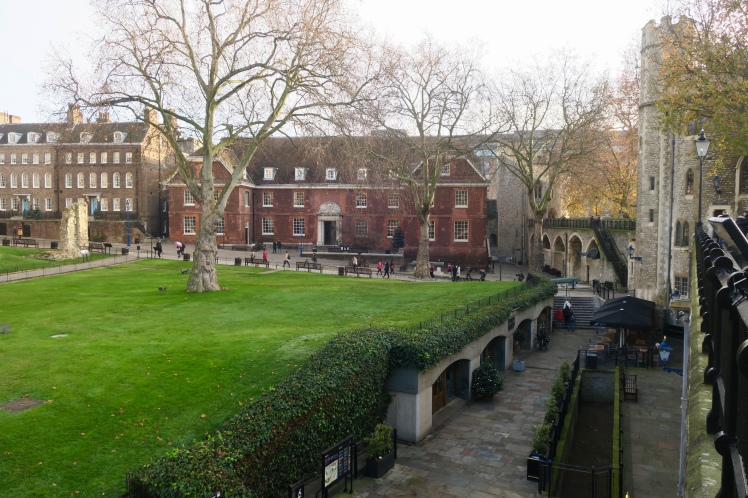 I’ve visited the tower as a child and what I remember most about that visit (in addition to the Crown Jewels) are the ravens. Apparently there are seven of them there. I wonder if this here is Jubilee, Harris, Gripp, Rocky, Erin, Poppy or Merlina? 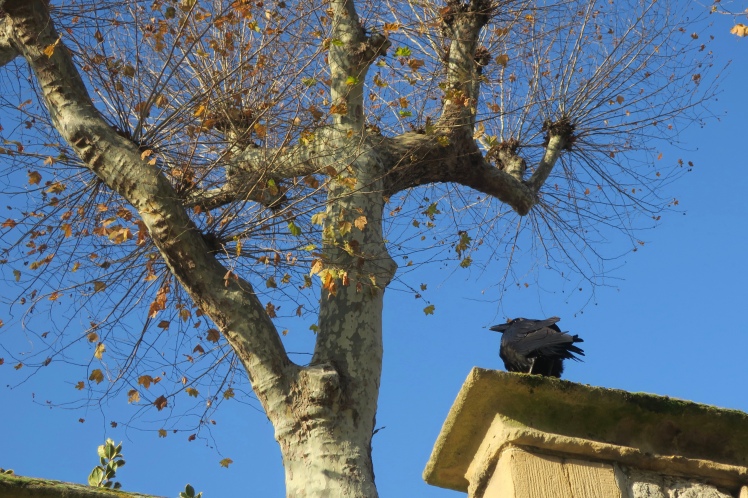 After our comprehensive visit, fish & chips was next on our list. Looking on my map, I found that there was a restaurant with rave reviews on this particular dish in the area. We strolled to The Mayfair Chippy which just opened for lunch as we approached it. 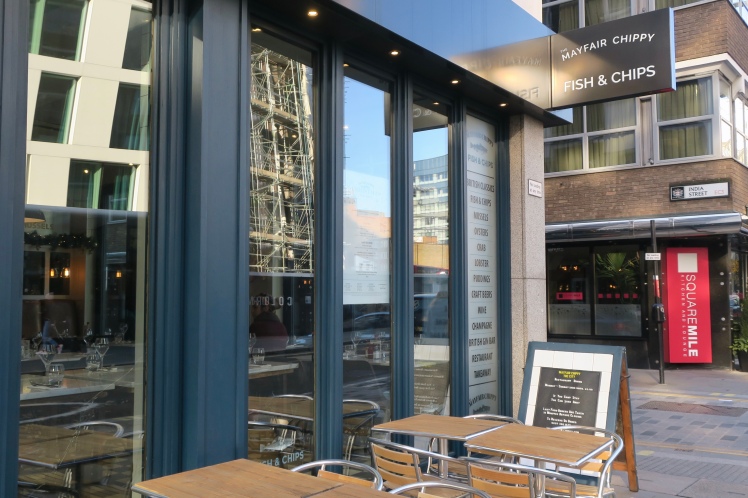 The restaurant is stylish and airy and their fish & chips extremely yummy. The portion was huge. You could choose cod or haddock and the fish is served with three different sauces – tartar, pea and curry. Excellent! 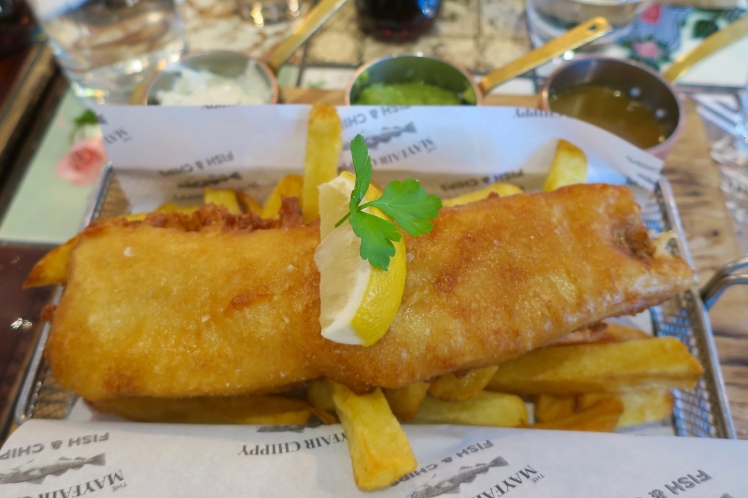 We then decided that now would be the time for some shopping. My son wanted to visit Primark, so I found the nearest one on my map and off we went. Luckily the men’s section wasn’t very crowded, so we managed to buy some shirts for him. We did try shopping in some other high street stores as well but the crowds were massive and there really wasn’t any room to browse. I was tempted by the Ted Baker sales but knew my son would be bored to tears so I shopped online later on instead.

We did manage to visit one of my favorite tea shops, The East India Company, where we got some teas and biscuits to take back home. We soon found ourselves quite exhausted from all the shopping and decided it was time for some tea and scones. We found ourselves near Piccadilly, so we popped in the Patisserie Valerie there. As expected at such a location, it was full and we had to wait for a table but having no energy to find another place we were happy to do so. The scones with jam and clotted cream were absolutely lovely, so it was definitely worth it. 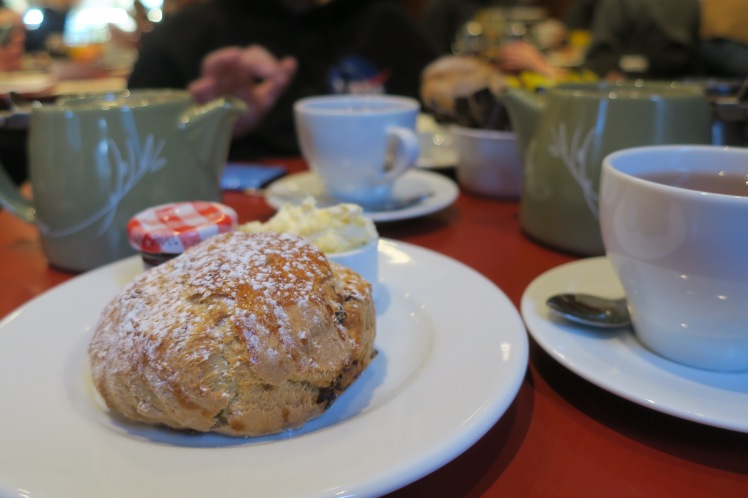 I calculated that we would have time to drop off our shopping at the hotel and then make our way to the London Dungeon. Unfortunately I had not anticipated that we’d miss our bus! Just as we were nearing the bus stop, we saw the taillights of the double decker. What luck. My phone told me that another bus would shortly arrive but after waiting for over 20 minutes I had to admit that we would soon be late for our time slot. I ordered an Uber but I should have done that much sooner, as the traffic was terrible and we did not make progress as I’d expected. In the end we had to run to the Dungeon, as our time slot was the last one of the day. The Dungeon is always good fun but I’ve now seen it twice and even though the story had changed a bit, it felt repetitive. My son was really into it and I’d say it’s the perfect place for teens visiting London. A great way to learn about the gruesome history of London too. I was shocked to see some very small children (as in 4-5 years old) in our group. They must have been scared witless, as even I found the show scary at times. 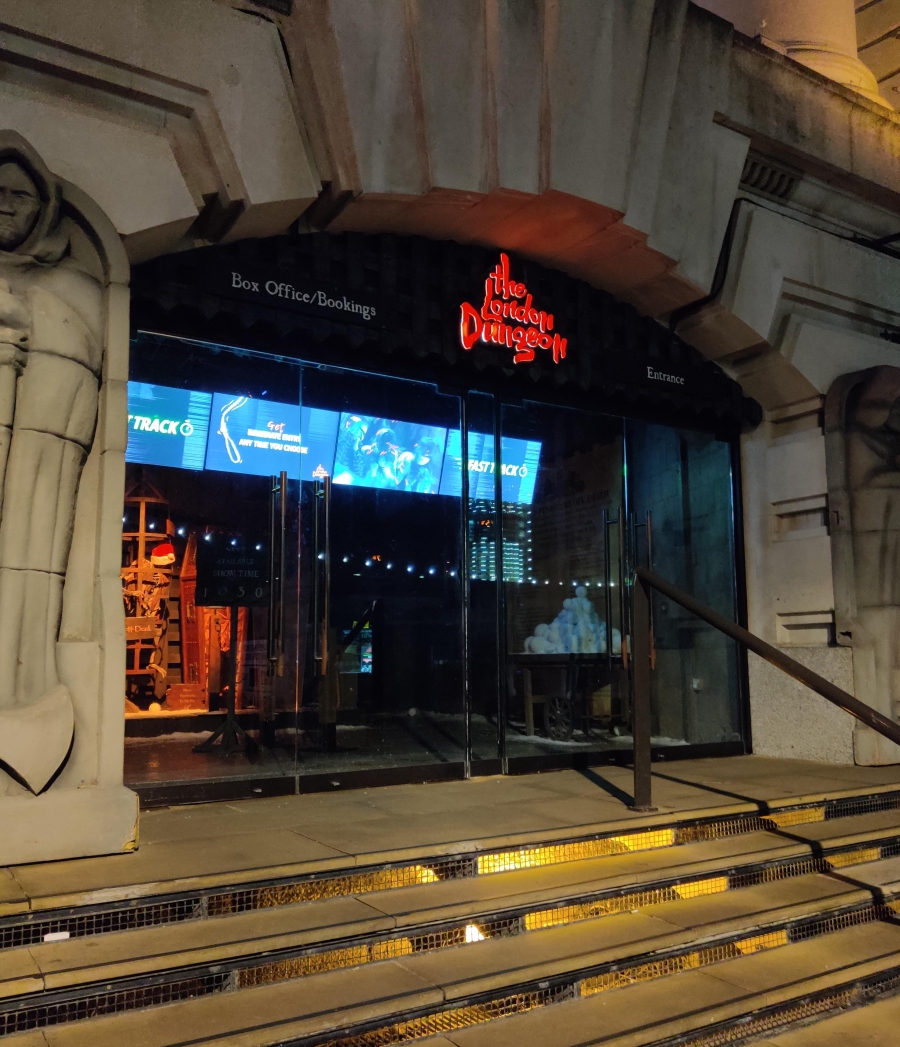 It’s quite lovely by the River Thames in the evening.  We admired the London Eye which looked fantastic lighted up. The idea of a ride on the Eye is fun but in reality I always find Ferris wheels boring after a few minutes and I can’t wait for the ride to end. Also the windows are often dirty which doesn’t help if taking photos of the scenery below. Thankfully my son didn’t express any interest in going on a spin, so we were happy to admire it from the ground. 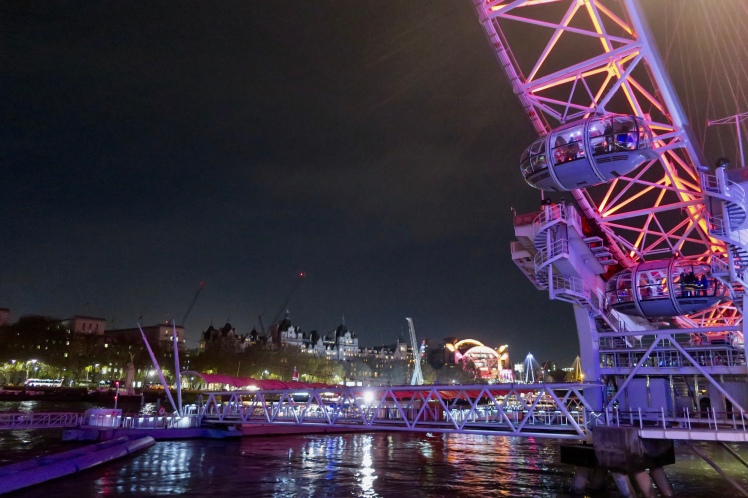 Feeling hungry, we started walking towards transportation to take us somewhere for food but noticed that there was a street food market going on at Southbank Center. Awesome! We looked around for a bit and then decided upon Kanji‘s katsu. We tried the katsu teryaki and the sweet and sour katsu and both were delicious. In case you haven’t heard of katsu, it’s a Japanese dish of chicken. 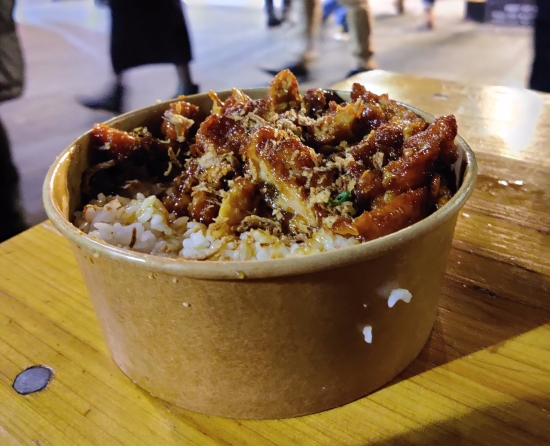 After our very satisfying meal, we hopped on a double decker bus to take us back to our Travelodge for some sleep. Yay, two more days in London to go!